When I was 8 years old, I marched up to Amy in the school yard and asked her how many boys in class liked her. We’ve been friends ever since. Founded on lunchtime ‘tiggy’, after school swimming training and weekend sleepovers, our friendship strengthened during the trials and tribulations of our teenage years, despite being at different high schools. I’ve always admired Amy’s strength, loyalty and the respect with which she treats each and every person around her. While we see each other less often than I’d like, it’s a great privilege to know this incredible woman after so many decades and watch her blossom into her newest role as a Mum. 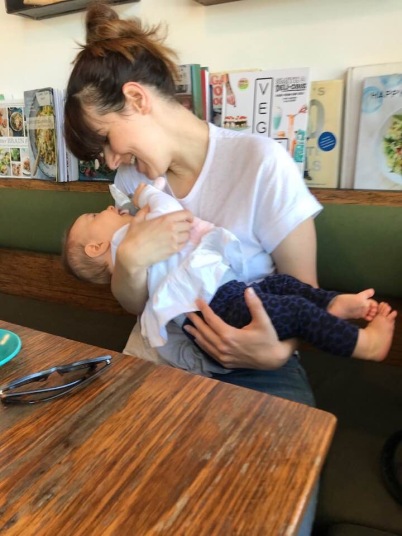 “We lost my Dad when I was 16. We had a really awful experience in the emergency department at the hospital. I can’t remember much, but I do remember the staff offering us very little support.

At that point, I knew I wanted to support other families experiencing loss, grief and trauma. I didn’t want anyone else to have my experience.

Initially, I wanted to study psychology and enrolled in social work with the intent to transfer. But I came to realise social work aligned much more closely with my interests. Rather than focusing on the individual, social work takes a holistic approach and considers how economic and social structures impact on a person.

In my first role at Hanover Welfare Services, I worked alongside families at risk of homelessness. My ultimate goal was to secure rental housing for them but there was generally lots of other things going on – substance abuse, family violence, deep-rooted financial issues. I had to address these causes surrounding their homelessness by liaising with other stakeholders and agencies.

Later, I moved to London and worked in child protection and frontline services in a London hospital, stepping in whenever midwives reported concerns for unborn children. As a 23-year-old, fresh-faced graduate from Australia, I had a huge amount of imposter syndrome when analysing how people were parenting their children.

The courts were generally in favour of keeping families together so some children, who would otherwise have been adopted, were kept in the system for years in the hope of eventual reunification with their parents. This could lead to children being moved in and out of different foster care placements, creating a vicious cycle of trauma and neglect.

I remember a colleague and I having to remove a young girl from her foster carers and place her in group housing because there were reports her carers had done something dodgy. Watching her pack her things into garbage bags while being unable to tell her why she was being transferred was harrowing.

When I returned to Melbourne, I was thrilled to get a role with the Royal Melbourne Hospital and over the past 10 years, I have worked there in a diverse array of roles.

My first role at the Royal Melbourne was in geriatric care. I worked with people who needed slow stream rehabilitation from an acute hospital setting towards whatever was next for them. Some of these people have complex social histories that need to be addressed before they can leave hospital – and that’s where the social worker steps in.

In instances where an older person has lost the capacity to make informed and reasonable decisions for themselves – for example if they’ve got dementia or a cognitive disability – our role is to identify what’s in their best interests. There is the risk of elder abuse in all forms – financial, physical and otherwise – and I was often required to meet with very demanding families and involve the Victorian Civil and Administrative Tribunal (VCAT) when an alternative decision maker was required.

After working in geriatric care, I moved into community therapy and rehabilitation. I worked with people with all sorts of injuries, enabling them to maximise their independence, and I provided counseling to support those adjusting to a new diagnosis such as a brain tumor, MS or Parkinson’s. I also worked on discharge planning and navigating the complex world of the National Disability Insurance Scheme (NDIS).

Before the NDIS, young people trying to access services and support often ended up in nursing homes because there were no other options. It’s heart-breaking to see a 30-year-old moving into a nursing facility for 80-year olds, simply because there’s nowhere else to go. Keeping someone in the hospital system indefinitely is obviously not in the patient’s best interests and it stops someone else accessing rehab.

Unfortunately, the NDIS underestimated the number of people that would apply for individual support because there wasn’t a lot of consideration given to those who were in the hospital setting and would need support to go home.

As a result, patients can be waiting for months to get things in place for their return home and in the meantime, they are stuck in hospital for 12-18 months. This is leading to the same issues we saw previously – young people winding up in nursing homes because there is no other option.

My current role is split between intensive care and palliative care – both very acute and frontline forms of social work. It’s one of my most challenging and rewarding roles yet.

In palliative care, my role is to make patients’ deaths as peaceful as possible – supporting not just them, but also their families. But those in palliative care aren’t just there to die. Many are there for symptom management, some will transition into an aged care facility and some even hope to go home. We work with the community and public care services and as always, navigate complex social issues.

The intensive care part of my role is much more trauma based. Working at one of the biggest trauma hospitals in Victoria, you never know what any given day might look like – you end up supporting families of those who have committed suicide or have overdosed while homeless or have been victims of family violence. It keeps you on your toes and you work very closely with a multidisciplinary team as well as external agencies.

One of the biggest challenges in my current role is dealing with issues regarding medical decision makers. Among those closest to a patient, there is often conflict about who should be the decision maker. Only two contacts can be listed as next of kin and those two contacts are the only ones who can be provided with direct update. This can lead to ongoing conflict. At times, VCAT need to appoint an independent person and my role is to remind those impacted that we’ve all got the patient’s best interests at heart.

There have been cases along the way that impact me more than most – perhaps because I can see similarities in my own life.

When I worked in rehab, there was the woman my age who was 28-weeks pregnant and had a massive stroke.

There was the time, when myself and a doctor were responsible for telling a patient’s 10-year-old daughter that her mum was going to die.

Then there was the young, pregnant girl in her early 20s who had been raised in the system and had significant mental health issues and a history of trauma. She had been accused of trying to stab her previous social worker and had been known to punch herself in the stomach to avoid having her baby. Four hours after she had given birth, I had to deliver the news that her baby would be removed unless she agreed to time at a mother and baby clinic. While she agreed to go, I’ll never really know what happened to her or her baby long term.

These are the types of cases that stay with me. I’m sure there will be others.

Working in this field, I’m constantly forced to put my own shit into perspective. Horrible things happen every day. I could spend my life living in fear but, instead, I try to recognise how lucky I am in each moment.

I feel so grateful for the work that I get to do. I’m supporting individuals and families through such deeply personal moments. It’s a privilege to respond with empathy and provide the level of support I wish I’d had all those years ago.”