I met Emily when I was 17. Our paths crossed when we volunteered for two weeks on a camp for people with disabilities. Emily was so at ease with the work and the other vollies that I incorrectly assumed she had done it all before. That first camp was one of many I had the privilege of enjoying with Emily and we have shared oodles of other memorable moments since – from climbing up some structures in the middle of Lake Mountain to sharing a plastic poncho when the heavens opened at a music festival. Emily is one of the most vivacious and magnetic people I’ve ever met and learning about her recent project over a pint was unsurprisingly uplifting (and hilarious)! 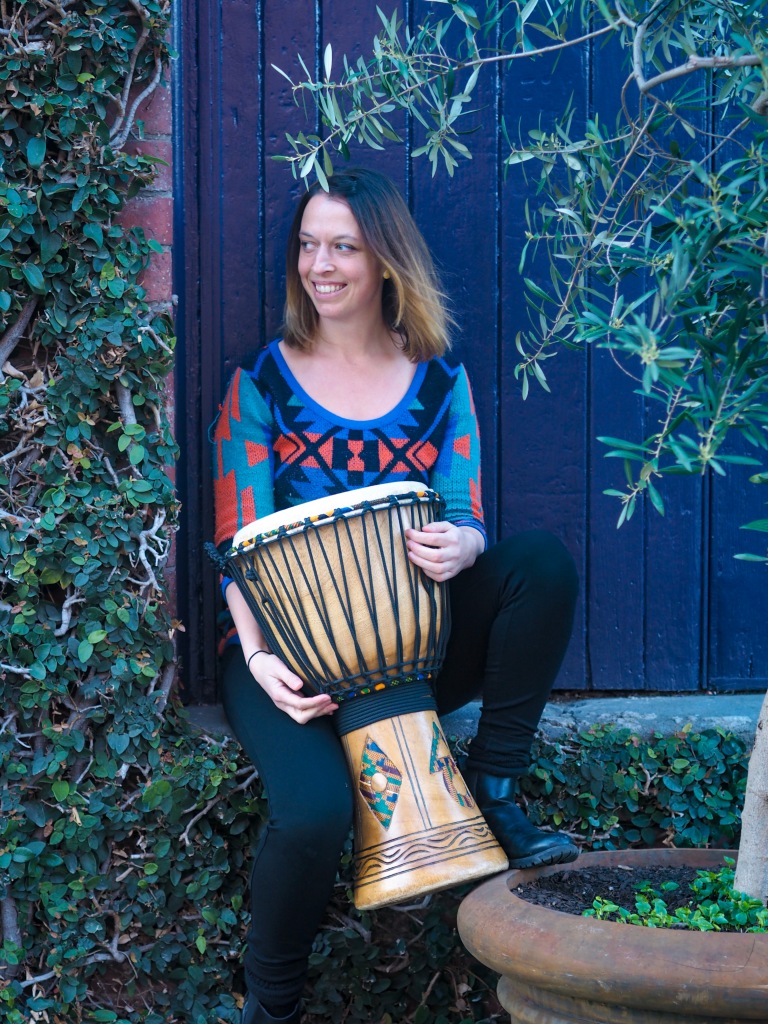 “As one of six kids, being in big groups comes naturally to me. So, I’ve always pursued opportunities to work in new and different communities, whether that’s flinging myself over to the other side of the world for Camp America or spending my summers working on Legacy camps for people with disabilities. In these situations you can be anyone you want to be which is both liberating and frightening.

A ridiculous  amount  of self development – contemplating what is important and what it means to be me – has led me to realise that what matters most is the people you’re surrounded by.  You can achieve much bigger things when you come together in a group and work on a common task.

I really enjoy bringing people together, learning about their quirks and differences and finding a way to make it all mesh. I think that’s why drumming has been such a simple but powerful tool and why it’s had such a significant impact on my life.

I had a djembe for a few years but it wasn’t until I moved to Dromana and joined a drumming group that I really fell in love with it. I was working as a camp chief, but I didn’t know many people locally.

Drumming was initially a social outlet but quickly became so much more. I love that sometimes you take a step into a path for one reason, but it ends up becoming so important for an entirely different reason. For example, my drumming teacher Pete, is like my guru, one of the other drummers, Jai is now engaged to my sister’s friends and drumming has become my focus. Crazy to think it all stemmed from a need to meet people when I moved house!

The first time I went along to the drumming group in Dromana and heard the other drums around me I felt like I had been lifted off my seat. I had never imagined that something so simple could be so beautiful and have such an impact.

Shortly after that, my sister and I ran a mother and daughter camp. We invited my teacher, Pete to run a drumming session. I was blown away by the way that everyone got involved. It occurred to me that maybe I could pursue drumming workshops in the future.

After six years in Dromana I realised that that I could very easily wake up at the age of 50 still living at the camp. It was such a comfortable lifestyle, but there were so many other things I wanted to do. Africa had been on my wishlist for a while so one day I decided to quit and work in London for three months to save for a six week drum and dance tour through West Africa.

Being in Africa was such a humbling experience (I hate the word humbling, but there’s really no other way to describe it). I’d been drumming for six years and thought I’d learnt so much. Being there however, I realised I knew so little. It was incredible. My brain exploded with the talent that seems to be so ingrained in a lot  of the people we met. Their drumming is so technical and the way they hear rhythm is incredible.

We started in Ghana and stopped off to learn from a few communities along the way to Burkina Faso. Each community has their own style of playing. We’d have group lessons every day and you could pay a bit extra to have a private lesson with one of the masters to perfect your solo drumming skills.

The tour culminated in a big performance in the town centre with about 1000 people watching. As well as drumming, we did rehearsed dances and were encouraged to do a solo dance if we felt drawn to do so. The locals all got up and did these amazing solo moves, then a couple of other Australians got up and then I found myself, as if in a trance, on the stage attempting my finest robot moves followed by what could possibly be described as ‘twerking!’ As lanky and awkward as I am and as it was, the crowd cheered. I like to think that as long as you’re authentic and you bring whatever you’ve got, it will be cherished. It doesn’t have to be perfect, it just has to be real.

It’s so different here in Australia. Kids often grow up so restricted by what they’re expected to be and what other people think. But in Ghana, it seemed as though they’re not worried about how they sound or what they look like, they just wanted to express themselves however the music drives them to.

After the tour, I went back to England and did some more care work. I really enjoy care work, but I missed working with groups. It occurred to me that I could use the tools that I’d learnt in Ghana as a vehicle to do just that. I started telling people that I was going to create a drumming business as a way to connect people.

When I got home, I realised I had no idea what that would look like or how I would start. So, first things first, I purchased 25 drums and then little by little I pieced it together until Boomshop Drumming was born. I just had to take one step at a time and deal with things as they came along.

My first gig was a youth camp being run by a friend. I ran three drumming workshops in a row and while I was worried that I was in over my head, once people started hitting the drums, it all came together.

Then, my sister invited me to do a workshop at my nephews’ seventh birthday party. My whole family was there watching. Gaining their positive feedback was so valuable.

From there, I emailed the nursing home my grandma had stayed at. She always had a love of music. A lot of the residents couldn’t actually hit a drum because they were so frail. Instead, I attached bells to their hands so they could tap along as I played. I stopped halfway through to give them a little rest, and we had a singalong while I played the guitar. But when I asked whether they wanted to sing or drum, there was a resounding preference for the drumming.

I’ve got another workshop next week with a corporate leadership group which will be so different again to what I’ve done in the past. Eventually I’d like to be able to take Boomshop into a town, get one or two paid corporate gigs to make it worth my while, and then offer free sessions to the local nursing home or child care centre.

This is the thing with Boomshop. I can work with anyone. Kids love noise and the freedom to shout, yell and celebrate the moment. Older people love the rhythm.  It is the perfect tool for unifying and animating a group. I feel as though when people hear the drums, it speaks to something ancient. It crosses language barriers and ability barriers.

I see this whenever I’m busking. Taxi drivers give me a wave. Kids give my drum a little hit. Tourists take photos. Runners start jogging to the beat. Honestly, it’s so nice. It’s a way to connect because music and rhythm are so ingrained in us.

You can draw a lot of meaning from the power of drumming in finding rhythm and balance in our lives. So while life often gets in the way, I drum as much as I can. I’m inspired again now just talking about it. It’s such a good way to release tension and bring myself back into the moment – ultimate mindfulness. Plus, sometimes, it’s just really good to hit things!”