I met Larry back in 2011 when we had both signed up to ride 800km in eight days across Thailand to raise funds for Hands Across the Water (Hands). Spending a fortnight in lycra with a group of strangers you would never have had the opportunity to meet otherwise was an incredible privilege as was getting to know Larry over a nightly Singha. I was immediately struck by his commitment to the cause, his deep curiosity and interest in those around him and his genuine drive to make an impact. Over the coming years Larry convinced me to do a 500km ride through the Snowy Mountains and worked alongside me during my stint at Hands. Catching up with Larry a few months ago over bircher muesli and coffee, it was hard to believe nine years had passed since we first met. I’m humbled that Larry took the time to share his story and excited to see the ripple effects of his work continuing for years to come.

“I was born in 1972 and my brother Gavin was born in 1976. Four years later, in 1980, Mum had twins – Clive and Marc. Marc died in November of the same year – he was born with a congenital heart defect and had spent every day of his life in hospital, bar one.

After Marc died, Dad decided to use the money he was no longer spending on medical bills to build a swimming pool for Gavin, Clive and I. Then Clive fell in the pool and drowned in 1983.  Shakespeare couldn’t have written this tragedy.

Clive’s death was a pivotal, life defining moment for me. I would cry myself to sleep with two questions circling around and around in my mind. Where had the twins gone and for how long?

Fast forward and life became routinely positive. While Gavin immersed himself in sport, winning a silver medal at the 2004 Olympics, I immersed myself in my career. I studied business and finance, got chartered at EY and later bought into a financial advisory practice. I was on a trajectory to fulfil my goal of retiring early.

Then in 2005, at the age of 33 years old, I woke up one morning at 4:21am stiff as a board, suddenly petrified that all I’d have in life was money. I spent that morning scooping the swimming pool, staring into the water and processing the path I was on. I questioned the damage I was doing to my wife and kids by continuing to work at a pace that would enable early retirement.

I made a decision then and there to put family above all else. This was the start of my journey of self-discovery.

I started wondering why am I here? What is this all about? What drives humanity? I returned to the questions that had plagued me at a young age – where had my brothers gone and for how long? – and realised I had been asking the wrong questions. I shifted my focus from where my brothers had gone to how I could make the most of my own time here on Earth. How could I feed my soul?

In 2009, I heard the founder of Australian charity, Hands Across the Water (Hands), Peter Baines speak at a conference. I loved his story and his clarity of purpose. I had a visceral emotional response to their work. Hands had been set up to support those impacted by the 2004 Boxing Day Tsunami – it existed due to the pain caused by drowning and that was a pain I knew all too well.

I reached out to Pete then and there, which sparked both a friendship and an avenue for me to start contributing.

Initially, I signed up for the annual Hands Across the Water charity bike ride through Thailand –  800kms in eight days. This was my focus from 2009 to 2011. I spent my time training, raising money and getting to know Pete and his charity.

This period of self-discovery made me realise that there’s more to life than making money and retiring early. My goal shifted from retiring early to never retiring. This simple shift seemed to stretch my time and made me realise I needed a balanced career. I wanted to continue running my business while also making space for my soul and society at large.

After that initial bike ride, I maintained my contribution by working with others to set up an Australian charity ride. We committed to raising a quarter of a million dollars for Hands over three years.

Then, in 2013, Pete spoke to me about the smaller charities that often reached out to him, seeking insight into his journey with Hands. Once a week Pete would have a coffee with a smaller not-for-profit, share his story and then walk away. He wanted to do more and he wanted my help to do it.

So, we hit the pavement for two years to uncover gaps in the market. We discovered that in most smaller charities, people don’t have the resources to invest in their leaders so we set our sights on creating a leadership development course that came at no cost to the charities involved. Simultaneously, it was clear that the corporate world were crying out for ways to teach influencing skills to their emerging leaders. So, we came up with an idea that solved both problems with one program – it would involve ten small charities, who have to do so much with so little, and ten emerging leaders in the corporate sector who are seeking a personal development journey and greater impact on society.

Once we knew that the idea had legs, we needed to build a clear and aspirational purpose. So, we set out to help 100 charities over five years. In April 2015, we secured funding from the Saunders Family and Commonwealth Bank to run the program and The Growth Project was born.

The charities we were working with turned over less than $2m a year, so couldn’t afford to pay for their leaders to access such training elsewhere. Ultimately, The Growth Project would ‘help those who help’. The charities are not the only ones who benefit. There are so many stakeholders surrounding The Growth Project and the benefits are circular – donors help beneficiaries, leaders are learning from each other, communities are supporting each other. We’re bringing leaders together for both personal development and maximum social impact.  It is an immersive case study into the impact of true collaboration between charity and corporate.

The outcomes have blown us away. Charity leaders not only take away the learnings, like clarity of purpose, but they also feel part of a cohort. They are no longer alone in the challenges they face. The business leaders not only become better decision makers, but they are inspired to bring more heart and humility to everything that they do, at work and at home.

As The Growth Project comes to an end here in Australia, having achieved our goal of 100 charities in the five years, the ripples will continue into London with a sponsor, Sage. They will replicate what we’ve done and extend the reach to 140 charities over seven years across two countries and four cities.

Although the program delivery will cease, we’ll continue to bring alumni together annually to keep the ripple effect alive.   We will also seek to share what we have learned with Corporate Australia and seek to encourage them to build their own internal programs influenced by The Growth Project.

I will continue to look at how I can leverage and amplify my time and energy for maximum impact. Once The Growth Project has been completed, I will launch The Catalytic Impact Institute. It will bring together committed philanthropists with committed social change leaders to amplify impact and generate transformative outcomes that transcend any individual or organisation.

My contribution journey started with Hands, which in turn inspired The Growth Project for the past five years. This next step will be a ten-year journey with a focus on Youth, Women and Environment.

I have learned that every human being has at least one of four things to share for the benefit of society – time, money, talent or networks. I think it’s about people realising they don’t need a lot of money to be impactful – it’s OK to give in another way.” 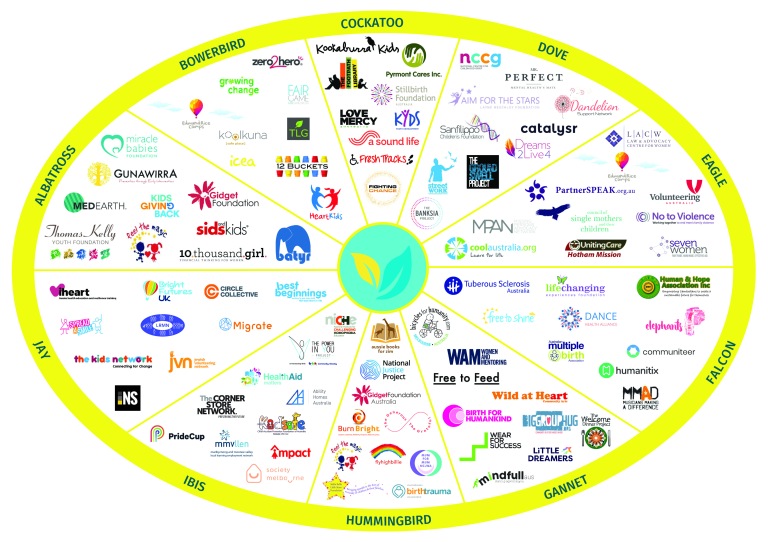